Known officially as the Grand Duchy of Luxembourg, this beautifully green country is surrounded by Germany to the East, France to the South and Belgium to the West and North, and is headed by the Grand Duke Henri Albert Gabriel Felix Marie Guillaume while having the Prime Minister Xavier Bettel as leader of the Democratic Party and main power behind Luxembourgian ministries.

Luxembourg is the second richest country in the world if you go by GDP per Capita, being only second to Qatar, and is a member of the European Union, NATO, the United Nations, OECD and Benelux. The country covers just over 2500 square kilometres and is home to over half a million people. 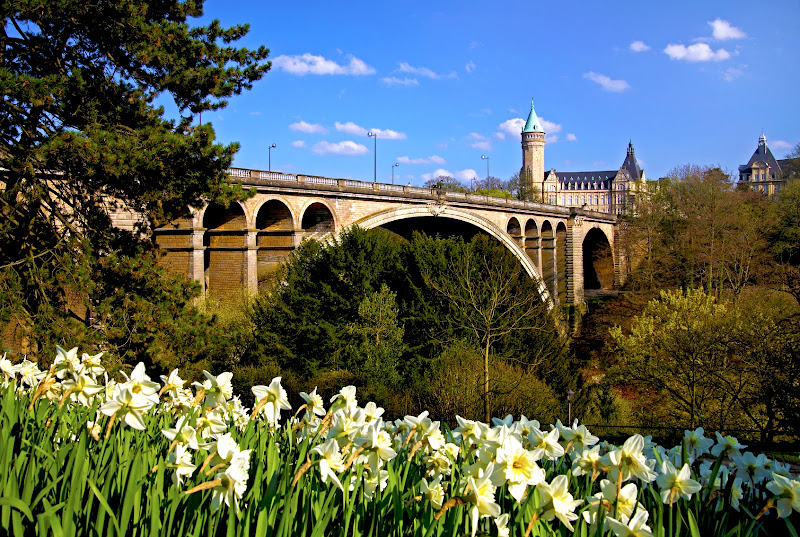 The evidence of the first primitive inhabitants of Luxembourg is in the form of decorated bones found in Oetrange which are dated to be over 35,000 years old.

However, traces of civilization, that is, housing, has been found in Aspelt, Grevenmacher and Diekirch, alongside pottery found in Remerschen, these structures date back to the 5th Millennium BC.

There is limited evidence detailing inhabitants of this time in the region but some evidence, such as pottery, knives and jewellery, has been found and dated back to as early as the 13th Century BC in the regions of Nospelt, Mompach, Dalheim and Remerschen.

It’s estimated that Celtic groups occupied the region from 600 BC onwards and are known to have constructed a range of fortified settlements, especially in the case of the Treveri, a Gaulish tribe.

The earliest evidence of Celtic civilization is in the form of various tombs have been found in Niederanven, Flaxwiler, Grosbous and Altrier and have been dated back as early as 450 BC. The tomb in Altrier especially contained some interesting finds, including a bronze stamnos (a water jug) of Etruscan (Ancient Tuscany, Italy) origin, a gold bracelet, an ornate bronze and coral fibula (a broach) and an iron sword. The Grosbous tomb is also interesting as when it was discovered the corpse had been placed on a two-wheeled chariot. These finds indicate that the Celts were well versed in making basic vehicles and crafting gold, bronze and iron as well as likely trading with nearby cultures.

In the 1st Century BC around 53 BC, Julius Caesar’s Roman empire pushed into Luxembourg and took it without much resistance as the most dominant tribe, the Treveri, quickly adapted and became part of the empire without hesitation.

In the 1st Century AD, two revolts against the Roman Empire by the Treveri served to bolster their ranks significantly, but did not permanently damage their relationship with Rome. In the 4th Century AD, the Germanic Franks pushed into Luxembourg and drove Rome out, seeing it completely abandoned by Rome in 406 AD. It then became part of Merovingian Austrasia in 480 AD.

During 800 AD, Charlemagne was crowed Emperor and Luxembourg became part of the Carolingian Empire, this eventually became the Holy Roman Empire which assumed control of Luxembourg as a part of Upper Lorraine in 959 AD. Luxembourg’s main city began to develop a few years later when Siegfried I, Count of Ardennes, traded some of his ancestral lands for an old Roman Fort named Lucilinburhug. This fort saw a town develop around it over time and became enlarged and strengthened over time by the Bourbons, the Babsburgs and the Hohenzollerns until it became known as the Fortress of Luxembourg, one of the strongest fortresses in Europe, also known as ‘Gibraltar of the North’. It became known as many names including the prior two names mentioned, but also Lutzburg, Lutzelburg, Luccelemburc and Lichtburg, among others.

Over time, Luxembourg became a duchy and saw the Kings of Prussia advance claims into the patrimony as heirs to William of Thuringia and Anna of Bohemia, dukes of Luxembourg in 1460 AD and the Prussian royalty gradually pushed into the region little by little.

Around 1609, the Kings of Prussia had managed to establish a territorial base in Luxembourg and rapidly claimed more land as they saw fit, meanwhile the country itself had become controlled by Albert VII after it had been bequeathed from Phillip II of Spain to his daughter Isabella Clara Eugenia and her aforementioned husband Albert. However, in 1621 he passed away without children and the country was passed to his great-nephew, Phillip IV of Spain. In 1684, Louis XIV of France invaded Luxembourg and in retaliation, the League of Augsburg, also known as the Grand Alliance, was formed by Austria, Brandenburg (modern-day Prussia), England, Ireland, Scotland, Bavaria (another part of modern-day Austria), Portugal, Spain, Sweden, Savoy (part of modern-day Italy), Saxony (part of modern-day Germany), the Dutch Republic (part of modern-day Netherlands) and the Holy Roman Empire (modern-day Germany and parts of modern-day France) a couple of years later. By 1697, France had surrendered Luxembourg back to the Prussian Kings.

In 1715, Luxembourg was integrated into the Austrian Netherlands (most of modern-day Belgium) and Austrian royalty began to rule the country and political power shifts were planned repeatedly but none were successfully executed. In 1795, Luxembourg was conquered by France once more, and although Luxembourg rebelled three years later, this was quickly silenced.

France ruled Luxembourg for the next hundred years until Napoleon was defeated in 1815 and the Congress of Vienna gave full autonomy to Luxembourg, but by now the country had been annexed repeatedly with Belgium, France and Prussian Germany taking big portions of the country’s territory. It wasn’t long before the Luxembourgian populace joined the Belgian revolution against Dutch rule and in 1830 the new Belgian state was formed with Luxembourg considered a province of it and in 1839, France ceded French-controlled Luxembourg to Belgium as well. However, in the same year, the country was confirmed as sovereign and in personal union to the king of the Netherlands by the Treaty of London and Belgium broke all ties with the nation as a result. The loss of the Belgian market caused high-intensity economic damage to the country and it became predominantly controlled by Germany, being merged into the German Zollverein in 1842.

For the next two decades the country would undergo multiple plans and attempts to be annexed by Belgium, France and Germany and saw these three countries involved in squabbling over the nation. But in 1867, Luxembourg took its independence during the second Treaty of London and all non-national garrisons were withdrawn. However, the country remained a possession of the kings of the Netherlands until William III passed away in 1890 and Luxembourg was passed to the House of Nassau-Weilburg due to the Nassau inheritance pact of 1783.

The Nassau household continued to rule the country as the era entered into World War I, and the country considered itself neutral in the war, being occupied by German troops forced Marie-Adelaide, Grand Duchess and Princess of the house of Nassau, to take a neutral stance. The occupation ended in 1918 and the country began being led by a new head of state, Charlotte, the new Grand Duchess of Luxembourg. A year later, universal suffrage for both men and women was introduced into the country as politics became more controlled by the people.

As the 1920’s rolled around, Luxembourg became a member state of the League of Nations and industry began more widespread as agriculture declined. In 1921, Luxembourg entered into an economic and monetary union with Belgium, the UEBL (Union Economique Belgo-Luxembourgeoise) but still retained strong ties with Germany as a trading partner. Meanwhile on the political stage, the Rechtspartei (Part of the Right), dominated the governing forces, this was mainly due to the support of the church as over 90% of the population were Catholics, as well as having the support of the newspaper: The Luxemburger Wort.
In the 1930’s, politics deteriorated rapidly as squabbles between Luxembourgish political parties were influenced by European right and left wing politics with the government attempting to quell communist-led troublemakers and continuing friendly negotiations with Nazi Germany. The Communist Part was officially outlawed in 1937 but this was overturned in the same year. In 1939,  World War II broke out and Luxembourg quickly declared itself neutral once more, but despite this neutrality and the friendly negotiations with Nazi-lead Germany, the country saw itself invaded by the latter and the German armed forces exiled the Luxembourgish monarchy and governing parties. There was minimal resistance to the German armed forces in the city of Luxembourg and it was captured quickly. The Luxembourgish Royal Family fled to the United States and the Grand Duchess Charlotte herself began broadcasting through the BBC to Luxembourg to give the people hope from 1940 onwards.

In 1942, Germany began attempting to make use of the Luxembourg populace, shutting down the administrative, agricultural, industry and education sectors and declaring forced conscription into the German military as well as banning the use of French and forcing the use of German. These new measures drove rebellions and strikes across the country, but Germany brutally opposed the strikes, executing multiple strikers and deporting hundreds to concentration camps where they were usually later executed as well. However, in 1944, the US liberated most of the country and with the help of the other Allies, expelled the German forces completely in 1945. Neutrality as a tactic was abandoned by the populace following the end of the way in 1949 when it became a member of the North Atlantic Treaty Organization as well as the United Nations while forming a new economic and monetary union with Belgium and the Netherlands, BeNeLux.
Luxembourg formed the European Coal and Steel Community (ECSC) in 1952, and, in 1957, inspired by political activist and statesman Robert Schuman, Luxembourg formed the European Economic Community alongside Belgium, France, Germany, Italy and the Netherlands, and the country began to pursue a stronger political presence as a mediator between nations. In 1964, Grand Duchess Charlotte was succeeded by her son, Grand Duke Jean.

The country continued to develop further but saw the crisis of the metallurgy sector in the 70’s and a recession was barely missed. In 1985, Letzebuergesch (Luxembourgish) was declared the national language and the country became trilingual with German as the written language and French becoming the language of official letters and law. The same year, a mysterious bombing spree spread across the nation, targeting electrical masts and installations.
In 1993, the European Economic Community was renamed as the European Union and two years later, the Prime Minister of Luxembourg, Jacques Santer, became President of the aforementioned European Union, but later had to resign over accusations of corruption. In 1998, the Banque Centrale du Luxembourg (Central Bank of Luxembourg) was created and the following year in 1999, Luxembourg joined the Euro Currency Area.

In 2000, Grand Duke Jean abdicated the throne and Grand Duke Henri, his son, ascended into power and in 2004, Prime Minister Jean-Claude Juncker became the semi-permanent President of the group of finance ministers for the 12 countries that share the Euro, so he is often dubbed “Mr Euro”. A year later, he threatened to resign in an attempt to foster votes for the European Constitution, the document was approved by 56.52% of voters following this.