It’s impossible to give an exact figure of religious diversity in Luxembourg as it’s been illegal for the government to collect statistics on religion since 1980, but it’s estimated that around 70% of Luxembourgian nationals are Christians (mainly Catholic), around 2% are Muslims, around 27% are Atheists and the last 1% follow other religious beliefs or practices.

The Grand Duchy recognizes and supports several dominations but in exchange has a hand in their affairs but today sees little interference from the government, if at all, in any religious branch, mainstream or not. Today, the state recognizes Roman Catholicism, Judaism, Greek and Russian Orthodox Christianity and Protestantism as officially mandated religions, other groups are also engaging in talks to become officially mandated religions as well including Anglicanism, Islam, and both Romanian and Serbian Orthodox Christianity.

The Treveri are mainly responsible for the earliest architecture in the region, a prosperous Celtic Tribe, the Treveri built small, low down, round buildings in small clusters all across the country. As the Romans moved into the country in the 1st Century AD, we see Bathhouses, Villas and even Mansions begin to be built around the country, this persisted until the fall and recall of the Romans later on that century. Soon afterwards, Christianity, first brought in by the Roman predecessors, began to sweep across Europe and a wide array of Churches began to be constructed, these were often revamped and restructured in the 14th and 16th Centuries with Gothic-style additions.

During the Medieval period, warring became commonplace between various factions fighting for control over the country as it became fair ground for claims by modern-day France, Germany, Belgium and the Netherlands. Both interior and exterior factions began to build large castles and fortresses, these include the Castle of Vianden and Bourscheid Castle, both built in the 11th Century, as well as Beaufort Castle and Clervaux Castle, both built in the 12th Century, among others.

In recent years the country has also seen a string of new developments with more efforts to accommodate the arts, sports and the financial industry. Most prominent are the National Sports and Cultural Centre built in 2001, the Philharmonie Concert Hall built in 2005, the Museum of Modern Art built in 2006 and the European Investment Bank built in 2008. 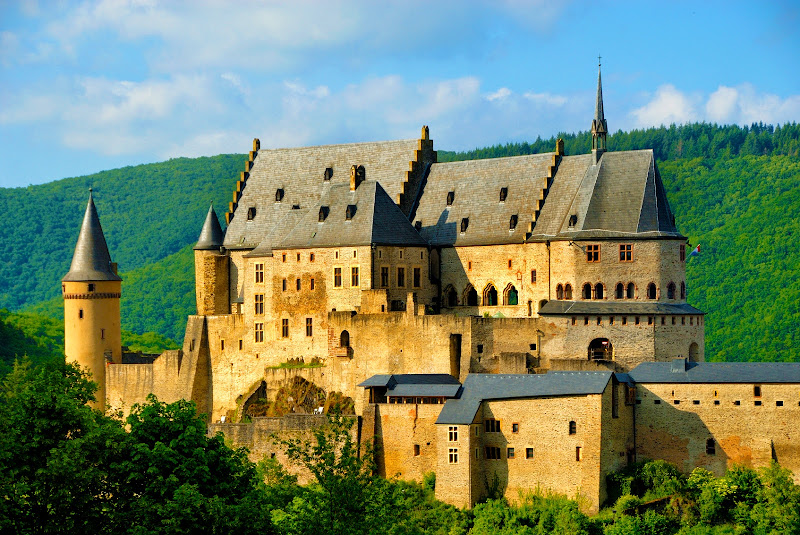 Today Luxembourgish citizens wear western-style clothing enjoyed all across Europe, but historically the country took many of its trends from France and Germany, and to a lesser extent, Belgium. The country was also influenced by Italian fashion frequently and saw men wear hats more consistently than that anywhere else in Europe, and women wear skirts and dresses more often than slacks or trousers. A general note of most Luxembourgian citizens is to always be well-dressed in public and to reserve other clothing for the home or for use whilst practicing sports.