Although the country has been declared Atheist, it guarantees freedom of religion. That said, smaller groups have been persecuted in the past when they haven’t been government approved. Over fifty-six percent of the population follows traditional Chinese Folk Religion and around thirteen percent practice some level of Taoism which branches off from this. Although the largest religion in China is considered to be Buddhism with around 20% of the population following this path, many Abrahamic religions also make a strong presence in the region including Christianity, Islam and Judaism.

Many other religions also make an appearance in the region including Hinduism, Confucianism, Zoroastrianism, Shenism, Zhuang Moism, Yi Bimoism, Tibetan Bon, Mongol Shamanism and many others.

Art Galleries and Museums in China are vast and spread across the region. These typically exhibit amazing works of Chinese origin and include Ceramics, Carving, Bronzes, Painting and one of the country’s national symbolic works, Calligraphy. The later artwork is majorly inspired by existing Asian cultures but it is important to note that Chinese artwork also pre-dates a lot of ancient civilizations and as such is thought to have inspired these groups in turn.

Famous museums within the country include the Beijing Art Museum which collects & researches into foreign arts and had recently had a millennium monument installed in the form of a sundial-like structure. Located in Pudong, Shangai, China, the China Art Museum was founded in 1956 and rebuilt in 1986 to collect and exhibit modern Chinese art. Finally, China’s most famous museum and structure is the Forbidden City, constructed in the early 15th Century the structure was used for almost five hundred years for royalty and high-ranking officials alone, now however, it is used as a World Heritage Site and Museum and is visited by millions every year.

It’s also important to note China’s involvement with a variety of different practices and technology. The Chinese are accredited in creating the world’s oldest board game, Wei Chi, now known in Go, in the 11th Century BC. Additionally, the country is home to the creations of Ice Cream, thought to have possibly be being developed as long ago as the 10th Century AD. These inventions and creations, along with many more, created more practical purposes for certain forms of architecture and demanded particular requirements.

Chinese architecture is incredibly distinctive and has strong roots in the various beliefs of the country including Buddhism, Taoism and Confucianism among others. The style of the buildings incorporates an incredible sense of bilateral symmetry to symbolize balance, an important trait in Buddhism, as well as additional small buildings placed on the sides of the main building to help keep the balanced motif working. However, the gardens in and around Chinese style buildings tends to be incredibly strongly contrasted with a purely asymmetrical design, depicting flow in nature and of the soul.

Today, China is highly westernized and as a result the nationals don’t tend to wear classical clothing unless it is for a celebration and/or annual/seasonal event. However, during these events the close are designed to be incredibly brightly coloured and are especially prominent with shades of red, and to a lesser extent, blue. The clothing style tends to be quite long and flowing as to not restrict movement and create a sense of elegance. Finally, it is common for longer-length style clothes to be embroidered with symbols and imagery, typically of country icons such as dragons, tigers, cranes and flowers of varying types.

Traditionally, the colours, imagery and styles used varied greatly throughout the years and across the social classes, especially when pertaining to that of royalty or nobles. For example, it was common for the emperor to wear white and yellow robes during the Qing dynasty while during the Qin dynasty, the emperor wore darker colours, typically blacks and reds or dark oranges. However, the symbol of the dragon is always associated strongly with royalty in every scenario.

Modern literature has seen authors such as Liu E and Wu Woyao from the 19th Century, as well as 20th Century authors Mu Shiying, Shi Zhecun and Liu Na’ou, have universally recognized works. However, it is important to mention that due to the highly westernized culture that China has, many western books such as the Harry Potter series are incredibly popular, especially among the youth.

Popular contemporary music and dance includes Pop, Rock, Heavy Metal, Hip Hop and Opera but historically a wide variety of instruments and music types have been seen throughout the country. These include stringed instruments such as the Takim (a stringed instrument with a movable bridge and up to fifty strings) and the Erhu (a two-stringed fiddle) were commonplace for clear sounds as well as the Yangqin, a type of Xylophone. For percussion, the Muyu, one of many types of drum, would have been used.

The Chinese typically base their events around their own calendar which runs independent of the Gregorian calendar used worldwide. The calendar features events such as Chinese New Year itself which is celebrated with fireworks and a variety of traditions based on native beliefs in the region. On the 15th day of the celebrations the country holds Lantern Festivals in towns throughout the nation which sees a lantern parade and a lion dance as well as a variety of meals including Tangyuan (a type of rice flour in hot water).

Later on in late February to early March, the Zhonghe Festival (Blue Dragon Festival) sees the consumption of Chinese pancakes and noodles as well as a large amount of cleaning throughout the house. Towards the end of March to the beginning of April, Shangsi, Traditional Chinese Women’s Day, is celebrated and in early April, more cleaning takes place as well as offering being placed at ancestral gravesites during Qingming (Tomb Sweeping) Festival.

Towards the end of May to the middle of June, the Duanwu, or Dragon Boat, festival takes place which sees the Dragon boat races occur and dumplings wrapped in lotus leaves are consumed. The Night of Sevens, Qixi, is celebrated towards the middle of August and sees the girls of villages pray to Zhainu for wisdom and offer paper items as offerings at the temples. In the Ghost Festival at the end of August, it is tradition to burn fake paper money and make offerings to ancestors to comfort them in the afterlife and keep them from troubling the living.

Around the middle of September, the Moon Festival takes place and families gather to have a meal together and eat Mooncake. Following this in mid-October, the Chongyang (Double Ninth) Festival sees outings, mountain climbing and visiting the graves of ancestors to pay respects. During the Water Lantern Festival, meanwhile, flower shaped lanterns are sent along the rivers at sundown to help guide spirits home. Then during December, the Dongzhi (Winter Solstice) Festival is celebrated with the consumption of Tangyuan and Jiuniang (yeast soup) as well as a family meal and ancestor worship. Finally, Laba congee is eaten during the Laba Festival in early to mid-January, when it is believed that Buddha gained enlightenment. 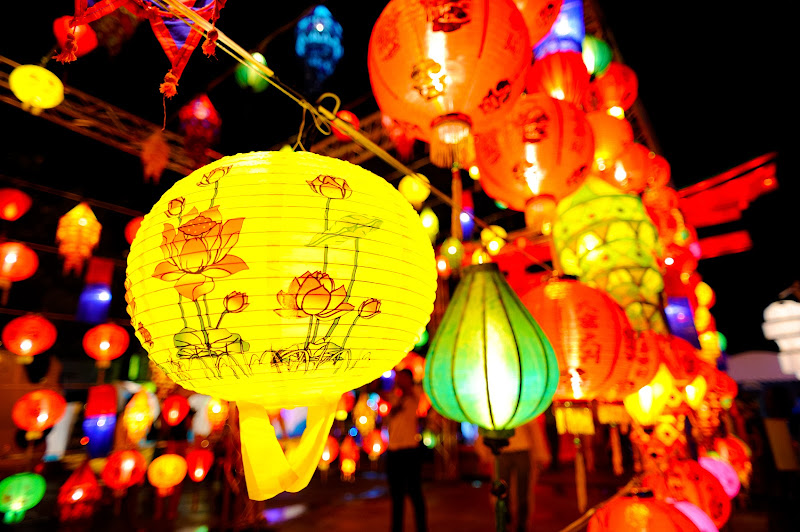