Officially known as the People’s Republic of China, the country is an East Asian sovereign state and shares borders with North Korea, Mongolia, Kazakhstan, Tajikistan, Afghanistan, India, Bhutan, Laos, Hong Kong, Russia, Kyrgyzstan, Pakistan, Nepal, Burma, Vietnam and Macau. The country is a Communist single-party state with the seat of government based in the capital city, Beijing, and also has full control over the matters of Hong Kong, Macau and Taiwan.
The second largest country in the world, China covers over 9.6 million square kilometres of land and features a range of environments, cultures and peoples, as well as being home to one of the oldest civilizations in the world, Ancient China.

China’s history is vast, stretching as far back as prehistory and recent archaeological evidence has shown the existence of humans, or pre-evolution humans, in the region as long ago as 2.24 Million Years. A cave discovered in Beijing was found to hold fossilized pre-evolved human remains and associated stone tools have been dated at between 680,000 and 780,000 BC. These fossilized are believed to be a Homo Erectus variant but Homo Sapien, or modern day human, fossils have been found which date back as far as 18,000 BC.

Legend holds that the first three sovereign nations and the first five emperors existed from 2500 BC onwards but no definite proof has been discovered, however, proto-writing has been documented in the area which dates back as far as 3000 BC. Also, scientific excavations in 1959 in Erlitou, Henan, have uncovered what are believed to be the remains of the once-considered-mythical Xia dynasty, claimed to have existed from around 2070 BC onwards.

However, the first Ancient Chinese dynasty to leave actual historical records was the Shang Dynasty which built up its own civilization along the Yellow River in Eastern China from 1600 BC onwards. They were known to use their own form of writing named the Oracle Bone Script and it is considered the very oldest form of Ancient Chinese writing found.

However, the Shang were soon conquered by the Zhou in 1066 BC and they ruled on until around 475 BC, when their grip on the country was ripped apart by a variety of warlords. Due to the lack of a central governing body the various groups waged war on each other whilst forming seven sovereign states, each with its own government and military system.

In 221 BC, the state of Qin conquered the other six kingdoms and finally unified China for the first time in history under the name Qin Shi Huang. The emperor of Qin declared himself the First Emperor and imposed a variety of reforms all across the country in an attempt to unify the country further, these included the standardization of the Chinese language, currency, length of cart axles and measurements. However, due to the forced authoritarian policies, the dynasty only lasted until 206 BC when it completely fell apart through widespread rebellion.

From 206 BC onwards a truly unified China was ruled by the Han dynasty and it was this point that the country’s economy began to truly expand. The Han dynasty set up the Silk Road through Central Asia and after a time, Han China became the largest economy in the ancient world. The Han dynasty also adopted Confucianism and this rapidly became the state religion.

In 220 AD, the Han dynasty collapsed due to a variety of rebel attacks as well as the death of the Emperor at the time. One again China became a warzone as various factions battled one another regularly for territory.

In 581 AD, the Sui dynasty once again reunited China, however, this victory was short lived as they lost in the Goguryeo-Sui War and fell apart in 614. It was four years later when the Tang dynasty rose to power and under them, the country flourished under the rule of the new polity, developing new technology including engineering, woodblock printing, medicine, cartography, alchemy, air conditioning and even widespread literature and literacy. Buddhism also made its first appearance in history at this time.

However, the Tang were wiped out in 755 when the An Shi rebelled and destroyed the central government and looted the nearby settlements. It wasn’t until over two hundred years later that the Song Dynasty quelled the now warring nations and remaining splinter factions of previous dynasties.

The Song developed the country even more than the Tang had, establishing paper money for the first time in history as the currency and forming a permanent standing navy. It was at this time that the population size of the nation doubled thanks to the high standards created by the Song dynasty as well as the abundance of food and expansion of cultivated rice. Life became more civilized in general as well with the people developing landscape art, portrait painting, philosophy and many other arts and sciences as well as Confucianism.

Starting in the 13th century, however, the Mongol empire began to dominate the region and in 1271, Kublai Khan, the Mongol leader, set up the Yuan dynasty, wiping out the last of the Song in 1279. However, it was a simple peasant, Zhu Yuanzhang, who turned the tides in 1368, setting up the Ming dynasty.

Throughout his life, Zhu Yuanzhang had endured poverty, disease and many other hardships and it was these factors that created an empathetic heart in him and brought the country into a golden age. Through the Ming dynasty’s efforts, the country flourished and developed dramatically, creating a variety of new forms of literature, music, painting and theatre as well as many new technologies including new forms of smelting iron, a reformed Chinese calendar, famine relief, fertilizer, snorkelling gear and new designs of gunpowder weapons and technology as well as improved medical equipment and practices.

In 1644, a minor Ming official named Li Zicheng lead a peasant rebellion and captured Beijing, overthrowing the government and establishing the Qing Dynasty. The last imperial dynasty of China, the Ming were involved in two Opium wars with Britain between 1839 & 1842 and 1856 & 1860, subsequently experiencing western imperialism. Through the power of the country, China was forced to sign unbalanced agreements, give away territory and pay compensation to the British. This included allowing Britain to possess Hong Kong.

The country also began having internal issues resulting in the deaths of millions such as the Taiping Rebellion in the 1850’s and 1860’s, the Nien Rebellion (1851-1868), the Miao Rebellion (1854-1873), the Punti-Hakka Clan Wars (1855-1867), the Panthay Rebellion (1856-1873) and the Dungan Revolt (1862-1877).
In the 19th Century the situation worsened as a famine hit northern China resulting in the deaths of over ten million people and many Chinese people began to emigrate to escape the crisis. In 1898, the Guangxu Emperor founded a new reform plan to set in place a constitutional monarchy, but before it could be utilized the Empress Dowager Cixi overthrew him in a coup d’état. 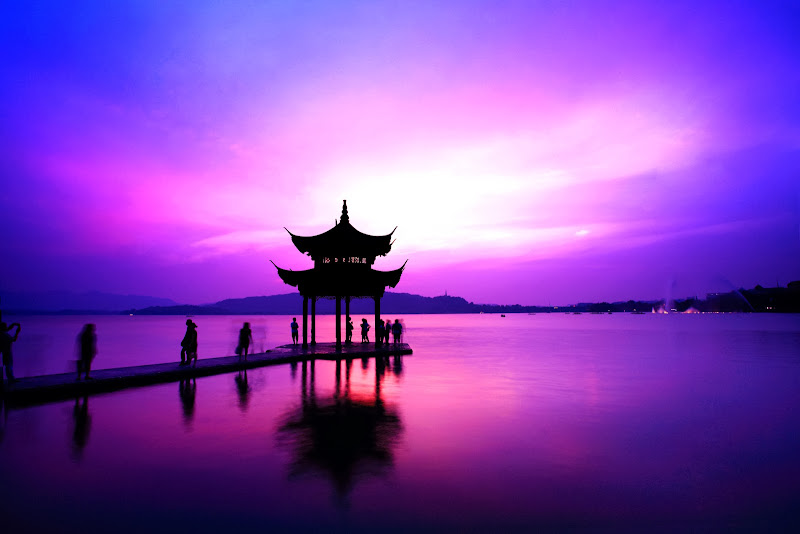 At the start of the 20th Century in 1899-1901, the Boxer Rebellion struck; following this the Xinhai Revolution of 1911-1912 ended the Qing Dynasty and founded the Republic of China. The Nationalist Party at the time had their leader instated as the provisional president but it was short lived and the presidency was transferred to a former Qing general, Yuan Shikai, who proclaimed himself Emperor of China in 1915. Due to the widespread condemnation and without support from his own military force, he stepped down and re-established the republic. He died a year later.

Due to Yuan Shikai’s death, the country was left politically powerless due to the regional warlords controlling most of the territory around the government city of Beijing. The Nationalist party in the region was able to reunify the country under the leadership of Chiang Kai-shek and after establishing themselves as the governing body in Ninjing, they began warring with the Communist party in 1927.

It was only when Japanese aggression in 1936 that China unified against Imperial Japan and the Second Sino-Japanese War commenced the following year. During the course of the war the Japanese military occupied Nanjing and massacred over two-hundred-thousand Chinese people and throughout the war over twenty-million civilians were killed. However, in 1945 Japan surrendered to China and the republic took over Taiwan. Despite the victory, the country was economically drained and war-ravaged, it wasn’t long before the National and Communist parties resumed war and it only ceased once more in 1949, shortly after the constitution was established.

The Nationalist Party retreated out of China and the Communist Party leader Chairman Mao Zedong declared the country the People’s Republic of China. The following year, China’s military forces captured Hainan and occupied Tibet, with the remainder of the Nationalist’s forces waging insurgency throughout western China during the 50’s. Through Mao’s leadership, the population practically doubles to over 900 million people at this time, however, this was horribly counterbalanced with his economic and social reform project, Mao’s Great Leap Forward, resulting in over forty-five million deaths from starvation and almost two million executions to proposed ‘counterrevolutionaries’.

It was in 1966 that Mao began his proposed Cultural Revolution, causing social rebellion across the nation for ten years until his death. Following Mao’s passing away, Deng Xiaoping rose into power and began largely reforming the economy, these reforms loosened the grip of the Communist Party on their citizen’s personal lives and disbanded the communes, prisonlike factories made up of civilian workers.

These events allowed China to slowly transform into a much greater mixed economy with a more open market and in 1982 the constitution was altered significantly to mirror the changes. However, the aggressive violence towards protesting students in Tiananmen Square in 1989 signalled that still not all was right within the Chinese government. Eventually, there was a shift and President Jiang Zemin and Premier Zhu Rongji rose to power in the 1990s.

Under the administration of the Premier and President, the country began flourish with over one-hundred-and-fifty-million people being pulled out of poverty as the economy managed to sustain an 11.2% average annual growth.

In 2001, the country joined the World Trade Organization and kept growing at a steady rate under the leadership of President Hu Jintao. But despite this, the rapid growth of the country had had severely negative effects on the country’s environment, resources and overall freedom of the people.

Due to a string of political disputes and scandals, the Communist Party shifted their leadership to Xi Jingping and Li Keqiang in 2013. Since then the Chinese government has begun large economic  reforms and planned reforms to the prison system and the one-child policy.