Chinese cuisine dates back as far as its history goes with recipes and a variety of food sources going back well over four thousand years. However, China’s most famous staple food is Rice which has been adapted in a multitude of cultivation methods and used in a wide array of dishes worldwide. Other staple sources in Chinese diets frequently include Noodles, Soybeans, Wheat and a variety of vegetables (Chinese Cabbage, Chinese Broccoli and Chinese Spinach) as well as herbs and seasonings (Scallion, Sesame Oil, Cinnamon and Parsley). Each region has its own variety of dishes too:

Dim Sum has rapidly risen to popularity all over the world and originates from the Guangdong province. The meaning of the name, ‘Touch Your Heart’, is a Cantonese term and seeing how attached people have become to the idea, it’s no wonder. The practice is to prepare a wide variety of very small dishes to allow participants to try as many different things as possible. These dishes often include Rice Rolls, Turnip Cakes, Soups, Buns and Lotus Leaf Rice.

In the Sichuan province, it is common to use bolder flavours in cooking such as those derived from the usage of Chilli Peppers, Garlic, Sesame Paste, Ginger and Sichuan Peppercorn. In the Shandong province, Braised Abalone and Braised Trepang dishes are common and the region also utilizes a range of seafood dishes such as Sweet & Sour Carp.

Fujian values slicing and cooking technique greatly and uses many coastal resources in its provincial cuisine which usually is served in a soup of sorts, these also include a range of woodland ingredients such as Bamboo Shoots and Edible Mushrooms. Meanwhile, the Hunan province contrasts strongly against this with a much greater emphasis on hot and spicy flavour. 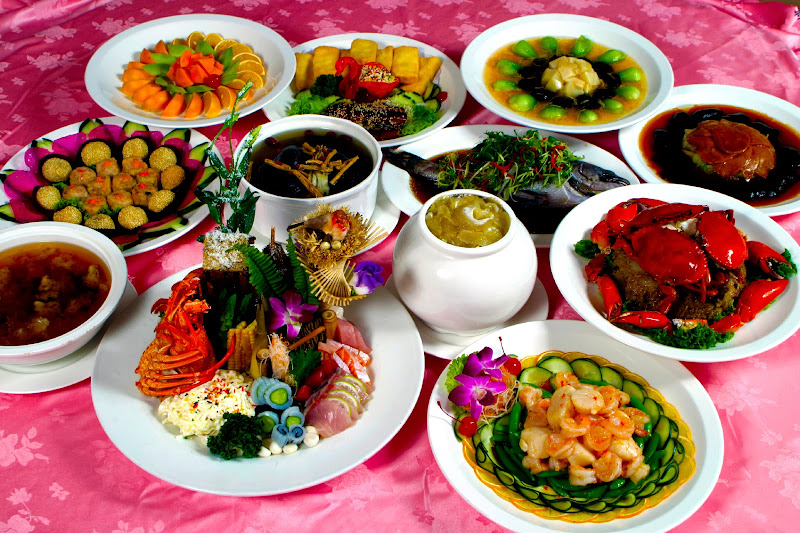 Zhe cuisine from the Zhejiang region incorporates the Hangzhou, Shaoxing, Ningbo and Shanghai styles of cooking and as such it may use aspects of each such as bamboo shoots, freshwater fish & poultry, seafood and dim sum, respectively. Dishes from this region are reputed to be extremely fresh and have a soft flavour with a mellow fragrance.

The Jiangsu and Huaiyang provincial cuisine style Su is influenced strongly by the Zhejiang province’s Zhe cuisine style but puts a greater emphasis on seafood and freshwater fish. Dishes may include Clear Crab Shell Meatballs, Jingling Salted Dried Duck and Farewell My Concubine (a stew made from a soft-shell turtle, often including mushrooms, chicken and wine).

The Hui cuisine style from the Huizhou province is similar to the Su cuisine style but errs away from seafood and focuses more on a wider array of local herbs and vegetables, especially bamboo and mushrooms. Other popular food includes Xinjiang Islamic Barbeque, Tibetan Cuisine and Mongolian Hotpot.

In addition to a wide variety of meals and dishes, sweets, desserts and cakes are widespread in the region as well as custards, jellies and the China-originated ice cream. China is also very well known for brewing many types of Chinese tea such as White Tea, Black Tea, Green Tea, Oolong Tea, Scented Tea, Compressed Tea and Medicinal Herbal Tea, China is also additionally the world’s largest exporter of Green Tea.