Although the country is multi-religious, the state religion is still declared to be Islam and over 60% of all Malaysians are Muslims. Additionally, no ethnic Malay is allowed to leave Islam whilst non-Malay Muslims may apostacize but only at the permission of a sharia court, which in itself is very rare.

The government prohibits any form of media it feels will incite any form of disharmony, racial, religious or otherwise. However it allows other religions to be practiced provided that all religious structures are registered with the corresponding authorities, and additionally that all religious matters are not displayed or discussed in public.

Other prominent religions in the region are Buddhism which makes up about 20% of the population, Christianity which accounts for about 10% of the religious individuals, Hinduism which is around 7% of the population, traditional Chinese religions such as Confucianism and Taoism make up about 1% of all residents, 1% are said to be Atheist and the remaining 1% are made up of other minor religions.

A variety of museums exist throughout Malaysia which help to showcase the extensive and deep history and culture seen throughout the country and across time. The Baba Nyona Heritage Museum exhibits a variety of pieces depicting the local history of ethnic Chinese Malays. Meanwhile, a replica of the notorious Flor de la Mar houses a museum by the same name and showcases the extensive history of the Portuguese expeditions into the region. One of the most prominent museums, however, is the Perak State Museum which is reputed as the oldest museum in all of Malaysia and displays the history of the state in explicit detail.

A combination of many styles including Chinese, Islamic and European (especially Spanish, Portuguese and British), as well as Indian building types, Malay architecture varies greatly depending on the region. Typically however, houses are built to adapt to tropical conditions and as such feature large windows and high roofs to allow air to flow through the house easily. Mainly built using wood throughout history, the more Westernized areas use more contemporary building styles whilst in lesser Westernized areas, such as Negeri Sembilan, the houses are older and built to be entirely nail-free. Meanwhile in East Asia, the Oral Asal live in longhouses on the water which have been elevated on stilts and built into connected villages. 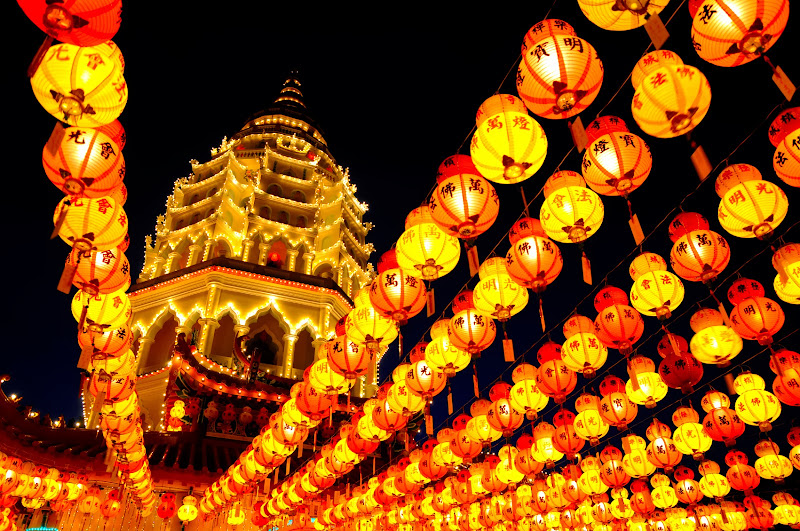 Clothing in the Malay language is known as Baju and combines three main cultures together, Malay, India, and China, into several variants worn across the region.

Malay clothing for men is known as Baju Melayu and features a tunic loosely worn over the top of trousers alongside a Sampin, a type of long cloth wrapped around the hips, and a Songkok, a type of cap worn on the head. These products are typically made out of bold and bright silk or cotton. Women on the other hand wear a Baju Kurung, a type of knee-length top worn over a long skirt, usually accompanied with a shawl or scarf. Additionally, it’s not uncommon for women to wear a Kemban, similar to a Sampin but tied above the chest instead of at the waist.

Chinese men typically wear a short sleeved shirt over the top of trousers, often decorated with various patterns, emblems and designs along with sandals. Chinese women wear a Cheongsame, a single-piece dress with a high collar and joined via toggles or clasps on the side or diagonally, often fashioned with slits at the side to breathe more easily and usually made out of silk or another soft fabric. Elderly women are known to commonly wear the Samfoo, sort of like a pair of pajamas but with the top being loosely fitted and the trousers being angle or sometimes shin length.

Indian female fashion sees a large use of the Saree, a long cloth worn with a petticoat draped around the body, and the Salwar Kameez, a type of long tunic worn over trousers with a shawl. Men meanwhile are known to wear the Kurta, a knee length shirt made from either linen or cotton, for formal occasions, while when non-formal, the Sherwani: a type of coast, the Lungi: a variant of a Sampin, the Dhoti: a long piece of draped cloth, and the Kurta-Pyjama: a set including a knee-length top without a collar and pair of trousers with a string tie at the waist, are very common for both men and women.

Based on the ancient oral tradition existing prior to modern-day Malaysia, the influences from these ancient stories are responsible for a range of influences into more contemporary writings with the early works being inspired heavily by Indian epics and folktales. During the late 15th Century Arabic Jawi Script appeared in the region alongside the sweeping of Islamic culture across the region and as such the Malay Sultanates began their own literary traditions.

These traditions developed into what is modern-day Malay literature and include the Hikayat: a form of Malay poetry with a traditional narrative and the Syair: a more varied type of narrative but similar to the Hikayat. Famous works include the Sejarah Melayu (The Melay Annals) which documents the history of the country, the Hikaya Rajit Pasai and the Hikayat Hang Tuah which tell stories of heroes from the country as well as the Hikayat Sang Kancil (an old folk tale), Ramayana (a story adapted from old Indian epics) and Hikayat Abdullah, the biography of Munshi Abdullah, considered to the the father of Malay literature.

The music in Malaysia has been inspired by influences from Indonesia, China, Thailand and India but is thought to have mainly originated in the Kelantan-Pattani region with music based around a variety of drums, natural percussion such as shells and stones as well as various stringed instruments such as the Rebab, a type of bowed string instrument, and wind instruments such the Seruling, a type of flute. In the region storytelling has always been considered an art form and as such the music is used for both celebratory and fable-forming practices. Additionally music has been used during history as a means of long distance communication.

Types of traditional orchestra in the region is split in two, the Gamelan form is used for melodies which require stringed instruments and the gong, while the Nobat uses more wind instruments for a more solemn tune. Of course the variety of music varies greatly dependant on where you are. Both Chinese and Indian Malaysians have their own forms of music inspired by their homelands, and the ancestrally-based tribes of the Peninsula and East Malaysia have their own ancient music as well.

It should be noted that many types of music have been restricted in the country at least to some degree, Rap music is heavily criticised and Heavy Metal has been limited. Additionally, all foreign bands must submit a recording of a recent concert before they are able to play in Malaysia due to the government believing that the music is a bad influence on youths.

Dance wise, a multitude of performing arts including drama, dance and martial arts are based in the country. These include the Mak Yong: based in Kelantan and incorporating dance and drama strongly, Zapin: a form of dance performed in pairs and using a range of traditional instruments, and Silat: a type of martial art and dance form focusing on bladed weaponry, joint manipulation and throws. Additionally, the Chinese Lion and Dragon dances are highly popular and the Indian Baharata Natyam and Bhangra dances are incredibly prominent as well. There are also a variety of traditional tribal dances with a strong sense of spirituality.

Starting in mid-May a month-long celebration of Malaysia’s distinctively diverse cultures commences and celebrates a range of culinary tasting sessions and events, bright and colourful parties and a variety of cultural happenings and goings on all over the region. Typically roadshows happen frequently starting in Dataran Merdeka and move through Johor, Sabah, Negeri Sembilan, Terengganu and finally Penang.

In late April the state of Sabah begins to celebrate Sabah fest and holds a variety of events celebrating the state’s history, traditions and cultures. The events mainly take place in Kota Kinabalu.

Throughout the entirety of August the nation celebrates it’s month of independence with a range of firework shows, parades and a huge multitude of parties.
At the same time as Independence Month, the Ramadan Bazaar opens up for fasting Malays, allowing Muslims practicing the month of Ramadan to sample incredible food at the vibrantly coloured bazaars all across the country, especially in Kuala Lumpur.

It’s also important to mention that plenty of non-Malaysian traditions are celebrated as well, for instance, Chinese New Year is celebrated around the same time as it is in China and in Penang especially there are many, many wondrous fireworks displays for a truly colourful spectacle.