Due to Malaysia’s wide influence of cultures from all over the world, Malaysian cuisine is extremely diverse and takes on dishes and ingredients from Malay, China, India, Portugal, Thai, Indonesia and Arabia as well as many other countries.

Some of the most staple sources of food in the country come from Rice, Bread, Noodles, Fish and a variety of Meat such as Beef, Mutton (typically more goat than sheep), Poultry and Pork to name a few. Additionally, usage of Vegetables and Fruit is common and Malaysian Desserts are world-renowned as an international delicacy. 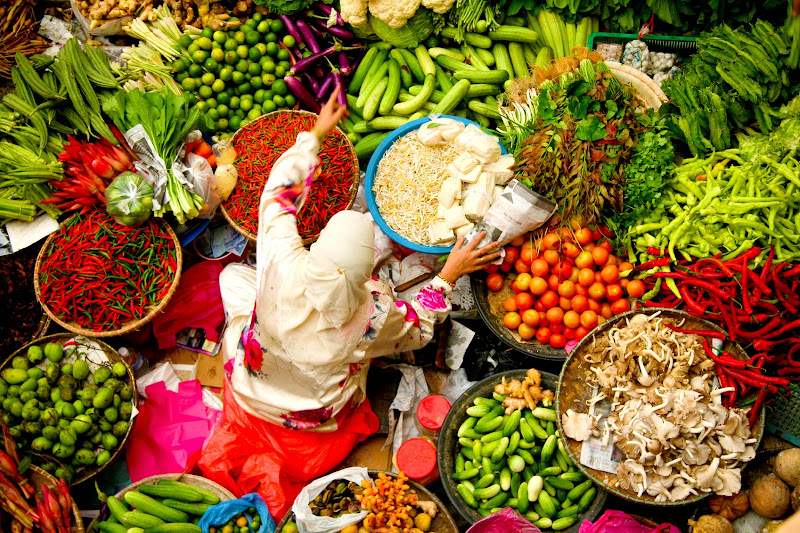 Common dishes include Nasi Lemak: steamed rice mixed with coconut milk often served with anchovies, cucumber, peanuts, hard boiled eggs and spicy chilli pasta, Fried Noodles: usually made from golden wheat, mung beans or rice, and Roti Canai: a type of Indian bread. Meanwhile, meat dishes are frequently prepared as halal meat and although Pork is avoided by the Muslim and Hindu communities making up a majority of the population, it is not illegal to sell or consume the meat and can be openly purchased in markets all over the region.

Popular fruit in the region includes the Durian: a fruit with a spiky protective layer and a pungent scent, the Mangosteen: a fibrous fruit with a sweet tangy flavour, and the Longan: resembling an eye when peeled and easy to shell just by squeezing the fruit out. Meanwhile Desserts are widespread and include such dishes as Ais Kacang: sweetcorn, grass jelly and red beans topped with condensed milk and shaved ice, Payasam: a type of pudding with a sweet flavour made from rice or vermicelli, and Pengat: a boiled banana covered in a mix of coconut milk and brown sugar.