With inspiration and influence from European, African and native American Indian cultures, Brazilian cuisine is known for its wide variety making it some of the most interesting and diverse food in the world. The region’s dishes can be split best between four regions, Southeast, Southwest, Northeast and Northwest.
Southeastern dishes primarily feature heavy use of Pinhao (Brazilian Pine Nuts) due to their wide abundance throughout the region, these are typically used in conjunction with pork, fish, beef, bean and rice dishes. Common dishes include the Feijoada (a meat stew dish with black beans), Picadinho (diced meat), Virado a Paulista (a pork and rice dish), Tutu de Feijao (a pork and bean dish), Frango com Quiabo (made with chicken and okra) and Moqueca Capixaba (fish and tomato stew).

Southwestern dishes, however, uses more pasta and livestock products in its food due to the heavy German immigration and traditions of livestock production in the region, dishes typically include Churrasco (various barbequed meats). Additionally the Chimmarao (a type of tea brewed with yerba, a mix of various herbs and leaves), is very popular throughout the country. 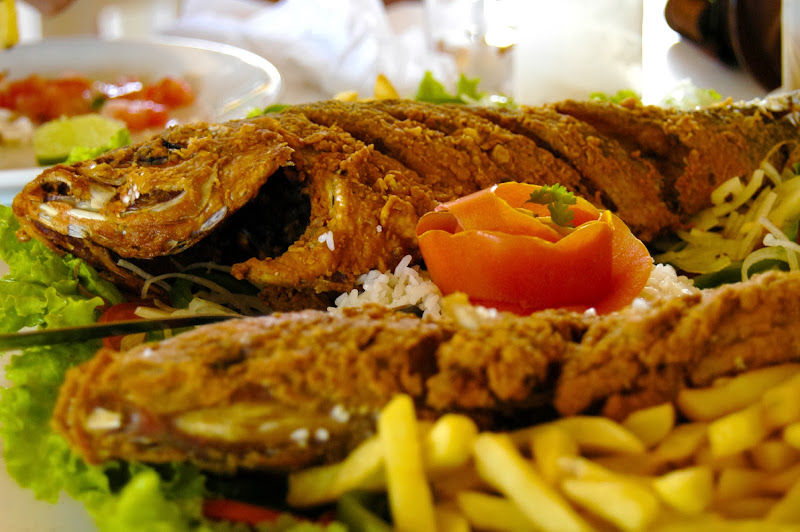 Northeastern dishes are influenced more strongly by African culture than anything else and may include the Vatapa (a dish made from coconut milk, shrimp, ground peanuts, bread and palm oil), Bobo de Camarao (shrimp and cassava, a type of shrub), Acaraje (palm oil deep fried black-eyed peas), Baiao de Dois (a dish made from coalho cheese, dried meat, rice, butter and beans) and various types of Tapioca pancakes and flatbreads.

Northwestern Brazil’s dishes take more from indigenous recipes, including the region’s most famous recipe, the Pato no Tucupi, which is made by preparing a yellow broth made from Cassava, fermentating the vegetable in the process and cooking it for several days, then adding slices of duck into the mix and allowing it to boil before preparing and serving with white rice and manioc flour.