The state religion is Islam and is also the largest religion across the Emirates. Generally speaking the government avoids interfering in the activities of non-Muslims but also expects non-Muslims to not interfere in the matters of the Muslim world. However, it does impose restrictions on spreading other religions through any form of media. There is a Buddhist Temple in Al Garhoud, a Hindu Temple in Bur Dubai, a Sikh Gurudwara in Jebel Ali and thirty-one Christian churches throughout the entire region among even more Islamic Mosques.

Statistically speaking, 76% of the population is Muslim, 9% is Christian and the remaining 15% is a mix of other religions, but mainly Hindu. However, among Emirati Citizens alone, 85% are Sunni Muslim with the remaining 15% being Shi’a Muslim. However, Omani immigrants in the region are mostly Ibadi with a few sparce Sufi groups. Atheist groups do exist within the country though and all residents whether religious or not are given equal protection and rights under the nation’s constitution.

Lead by the descendants of the Al Maktoum, Al Nahyan, Bani Yas and Al Qawasim, the United Arab Emirates has a deep culture rooted in Arab Muslim lines but also incorporates a few other cultures such as Persians originating from Iran and Europeans, mainly British, who have been in contact with the UAE for hundreds of years.

Among the famous museums and galleries of the region, Sharjah stands tall with its Heritage District containing a full seventeen museums and is considered to be the Cultural Capital of the Arab World.

However, Al Quoz in Dubai is famous for more contemporary art galleries and Abu Dhabi is a specialist in foreign and natively indigenous art with its most recent development being a culture district on Saadiyat Island. The island will include the Louvre Abu Dhabi Classical Museum, the Guggenheim Abu Dhabi Modern Art Museum, the Sheikh Zayed National Museum, a Biennale Park with sixteen pavilions, a Performing Arts Center and a Maritime Museum. Dubai additionally is planning a district for galleries and artists as well as a Kunsthal museum.

Largely inspired by Islamic architecture, the building style of the region is simplistic but very well-adapted to the area in response to the climate and lifestyle. Around the coastline many people lived in portable tents whilst further inland it was more typical to own a permanent house made of stone guss with palm tree leaf roofing. What permanent housing that there was along the shorelines, were decorated with block-cut sarooj-bonded fossilized coral or a lime mixture created from seashells, water and chalk. Due to the conditions, ventilation was considered a priority but not at the expense of privacy. 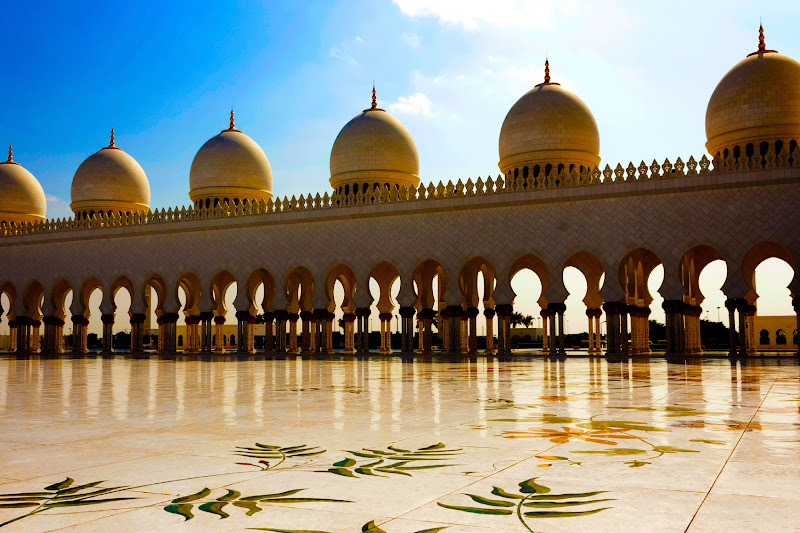 Typically, Emirati men wear traditional clothing such as a Kandoora (a long white shirt made of cotton or wool) and Emirati women wear an Abaya (a black outfit which covers most of the body). It isn’t unusual for nationals to own fifty of the same outfit as it needs to be constantly changed to ensure it kept clean in the conditions. However, among the Emirati youth it’s more common to wear western-style clothing.

It is important to note that clothing which covers the body properly is expected to be worn in public at all times, this includes places which in the west this isn’t strictly enforced such as the beach.

Among Emirati literature and poetry, the typical Arab authors and poets tend to depict a range of themes including patriotism, chivalry, family, satire, self-praise and love. It’s believed that the style and form of the oldest forms of Emirati poetry were influenced by the 8th Century Arab Scholar Al Khalil bin Ahmed. This form of poetry underwent gentle modification during the Islamic movement and subsequent civilization in Andalucia, Spain, before being majorly altered during the 20th Century due to western influences. It was also around this time that prose poetry began to become more commonplace in Emirati literature.

Famous literary masters include the 15th Century poet Ibn Majid, the 19th Century poet Mubarak Al Oqaili and the 20th Century Poets Khalfan Musabah, Ahmed bin Sulayem, Sultan bin Ali Al Owas and Sheikh Saqr Al Qasimi, who also ruled Sharjah. More contemporary poetry and literature in the region has taken a turn in having Apollo and Romantic Poetry influences.
The music scene compromises a wide variety of influences, genres and subgenres from all across the globe but the UAE traditionally houses Arab Khaleeji music which uses the Tabl Drum and the Oud (a pear shaped string instrument similar to a European Lute), Bedouin folk music which uses poetry-based lyrics either sung unaccompanied or to the stringed instrument the Rebab (as well as various woodwind instruments) and Yowla music which is most often performed by the Bantu peoples of the African Great Lakes region.

Additionally a range of world-famous pop and rock groups and individuals have performed within the UAE including Aerosmith, Elton John, Bon Jovi, Linkin Park, Celine Dion, Phil Collins and Kylie Minogue. Additionally, the Dubai International Jazz Festival is held every year and up until recently the Dubai Desert Rock Festival was also held annually.

Nationally January 1st is declared a national holiday as the first holiday of the new year, but less than two weeks later on January 13th, Mouloud, the Prophet’s Birthday, is also declared a national holiday. In February the Shopping Festival begins and over three million people travel to Dubai to take advantage of massive discounts applied at shopping malls and fashions shows across the city. In late February to early March the PGA’s Dubai Desert Classic starts at the Emirates Golf Course.

On May 27th the Leilat al-Meiraj, the Prophet’s Ascension, is declared another national holiday. At the End of Ramadan from July 29th to July 31st the public is given another public holiday and between October 4th and October 7th the Arafat Haj Day and the Eid-al-Adha (Feast of Sacrifice) are declared public holidays as well.

At the start of the Islamic New Year, Aj-Hijra, October 25th, the nation has another holiday and in November the Abu Dhabi Grand Prix commences, showcasing the best of the F1 on the Yas Marina Circuit. On December 2nd and 3rd, the public is given another holiday in respect to National Day. Some of the biggest New Years’ celebrations in the world take place in the United Arab Emirates with Dubai actually holding the Guiness World Record for the biggest fireworks display ever, in which it let loose over half a million fireworks off of the Burj Khalifa building.