Fusing together European and the Indigenous cultures of Mesoamerica, Mexican Cuisine features some of the most culturally diverse and critically unique dishes across the world. Some of the most common staple foods are taken directly from the native diet and include corn, chili peppers and beans but also feature food imported by the Spanish during their time in the country, these include beef, chicken, sheep and goat as well as cheese and some types of spices and non-indigenous herbs.

In the north its normal to eat Cabrito (spitroast goat), Arrachera (a cut of beef steak taken from the plate), Cuajada (a sweet creamy curd made from milk), Queso Fresco (farmer’s cheese) and almost sixty varieties of a smoked cheese called Asadero. The region is best known for the presence of wheat in many of its meals, especially in the production of tortillas. Additionally the region has recently seen widespread influence of Chinese and Jewish traditions in the production of food and Baja Med cuisine has emerged most of all.

Southern cuisine typically includes more influences from the Zapotec and, more prominently, the Mixtec civilizations. Mole sauce is commonly used in dishes and may include Negro, Coloradito, Amarillo, Chichillo, Mancha Manteles, Verde and Rojo varieties. Tamale, a type of dough dish, is commonly produced with corn and black beans are used frequently in soups alongside Enfrijoladas, a dish made out of corn tortillas, beans and cheese. 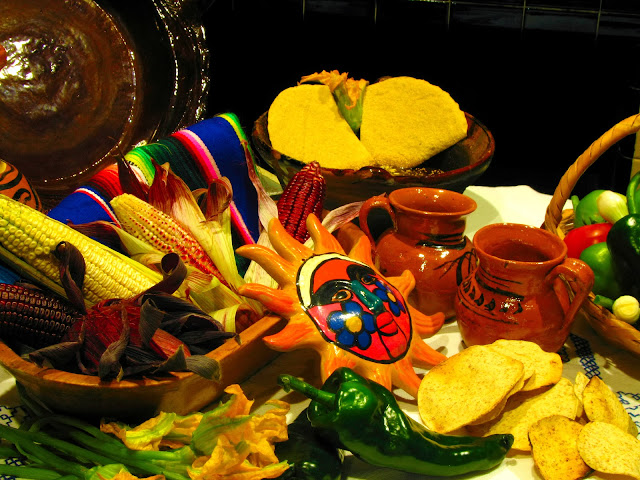 Moving more Westwards, the cuisine is based primarily on the Purepecha culture and features a larger amount of seafood in the diet. Dishes may include a variety of Tamales with different fillings called Corundas, Cactus Fruit flavoured stew, Menudo (a type of soup made with beef stomach and with a red chili pepper base) and many imported dishes such as rice and pork. Fish are most prevalent in the varieties of Marlin, Snapper, Shrimp, Swordfish, Tuna and Octopus, whilst tropical fruits and mild green chili peppers are used heavily.

Finally, on the far eastern region of the country the Yucatan peninsula houses even more types of cuisine. Food eaten here may include a range of tropical fruits, more so than their neighbours, in the forms of bitter oranges, tamarinds, avocados, plums and mamey. Additionally the region utilizes dishes such as the Cochinita Pibil, which is made by slowly roasting pork after marinating the meat in citrus juice and annatto seeds and wrapping it in a banana leaf.

Corn is also used in the hot drink Atole (flavoured with fruit, chocolate and rice) as well as being fermented for cold drinks such as Tejuino and Pozol. Many street vendors in Mexico sell these incredibly sweet drinks. Among the alcoholic drinks, famous varieties include Tequila, Pulque, Mezcal and Aguardiente as well as types of rum, wine, beer and brandy. Finally, Chocolate is commonly produced and drank in the country after being mixed with vanilla, chili pepper and Achiote (a type of seed from a tree of the same name).