In regions of southern Spain such as Andalucia see cuisine using various vegetable and fish types equally balanced meat use, but dishes made with Olive Oil and Olives are extremely common and may include Gazpacho (a type of soup served cold), Flamenquin (pork loin wrapped in slices of ham, coated in breadcrumbs and eggs and deep-fried), Salmorejo (a type of soup made from tomato and bread), Pringa (roast beef or pork with cured sausages, slow cooked in its own fat for several hours to make it extremely tender and served with break), Polea (porridge made from water, flour, salt, anise, milk and sugar, and occasionally fruit, honey or cinnamon, served with fried bread), Menudo Gitano (tripe with chickpeas served hot in a clay pot) and Zoque (a soup made out of red pepper, tomatoes and carrot, served cold with ham or shrimp).

The northern regions of Spain such as Asturias are known for a heavy reliance on seafood and corresponding dishes, often using squid, crab, shrimp and sea bass, as well as salmon, among other meats and vegetables. These dishes frequently include Fabada Asturiana (stew made from white beans, pork shoulder or bacon, back pudding, chorizo and saffron), Cabrales (a type of cheese), Faba Beans with Clams, Asturian Stew and Rice Pudding. Sidra (cider) is heavily produced in the region due to the plentiful bounty of apples grown every year, unlike French or English ciders, the cider is made from acidic apples and it is normally poured by an expert server from a high position, allowing the brew to be oxygenated as it drops into the glass below.


Western regions of Spain such as Extremadura see dishes affected greatly by the austerity of the region, this means the dishes are almost fully reliant on pork and mutton and are often famed for their simplicity and low-cost, these dishes are usually spiced with pennyroyal, bay leaves, anise and garlic and may be fried with olive oil and served with bread. The dishes are also known to often contain chickpeas, milk and other local produce from the region, producing dishes such as Callos Con Manos de Cerdo (tripe with pigs feet), Caldereta de Cordero (mutton stew), Cabrito en Cuchifrito (pork, usually stuffed and served with fruit), Cabrito a la Hortelana (Lamb stew with vegetables), Chanfaina (stew made from mutton liver, brain, heart and kidneys spiced with the region’s spices and boiled eggs), Hare Arroz con Liebre (rice with Hare), Frogs Ancas de Ranas Fritas (fried frogs legs), Potaje de Garbanzos y Judias Blancas (chick pea and bean soup) and Sopa Blanca de Ajos (white garlic soup), among others.

Finally, eastern Spanish regions such as Valencia utilize cuisine inspired by many other Mediterranean cultures and its dishes use ingredients of the meat, vegetable and seafood varieties, as well as citrus fruits. Dishes may include Paella (a type of white rice dish served with green vegetables, rabbit, chicken, duck, snails and seasoning, occasionally fish or other seafood), Arros Negre (rice with squid and squid ink), Arros al Forn (rice with potatoes and sausages), Fideua (noodles with seafood), Arros amb Costra (a rice dish often with meat and covered with egg), Arros a Banda (a rice dish with fish and sweet potato), Embotits (cured sausages), Bollit (vegetable stew), Suquet de Peix (a stew made from eel, potatoes, garlic and fish), All i Pebre (eel with potatoes, garlic and peppers), Esgarrat (salted cod with roasted peppers and occasionally garlic) and Espencat (roasted vegetables with peppers and aubergine, occasionally with other vegetables). 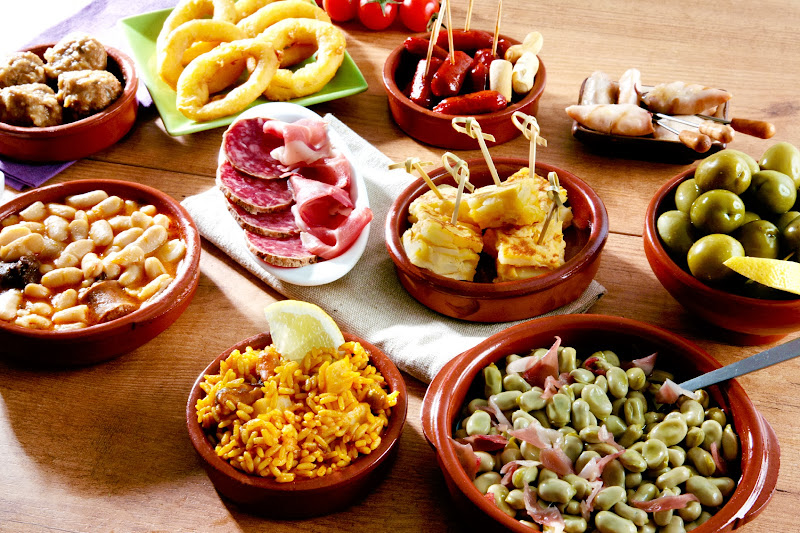