The main religion of Spain is Roman Catholicism with around 70% of Spaniards identifying as Roman Catholics, however, of this number almost 60% of them do not participate in any religious service. Other Christian branches in the country include Protestantism, which incorporates 1.2 million members into its services, around 105 thousand Jehovah’s Witnesses and around 46 thousand members of the Church of Jesus Christ of Latter-day Saints.

Due to its involvement with many other nations, a range of architectural styles can be seen throughout the region including Megalithic, Iberian, Celtic, Roman, Visigothic, Asturian, Islamic Al-Andalus, Mudejar, Romanesque, Gothic, Renaissance, Baroque, Colonial, Neoclassical, Neo-Mudejar, Modernist and Contemporary. The most prominent, however, are certainly Celtic, Roman, Visigothic and Islamic Al-Andalus influences, with the four stemming styles originating from Indo-Europe, Italy, Northern Europe and the Middle East respectively.

Celtic architecture, and its predecessors Iberian and Megalithic before it, feature stone circular huts and structures, as well as expanded trapezoids. These incorporate large stones fixed on the ground with other larger ones over them to form a roof, although later cultures developed the structures to use thatched roofs instead and utilized a wooden column or tree trunk to hold the roof up effectively.

Roman and the preceding Romanesque influences incorporate large and smooth clean-cut stone structures to form the base of a building, followed up with perfectly symmetrical round arches and straight walls and roads. Many pre-Roman Phoenician and Greek structures and towns were converted during the Roman Invasion of Spain in the early centuries BC and AD.

Visigothic, gothic and asturian architectural styles are often seen as the predecessors to renaissance, baroque, colonial and neoclassical architecture. These styles are frequently seen all throughout the European region and were widespread during the Visigothic empire and they depict a range of structures based around arches with stepped columns and sloped roofs with long pointed steeples.

The Islamic Al-Andalus style of architecture and the preceding Mudejar & Neo-Mudejar styles were inspired heavily by the invading Islamic Umayyad Caliphates from Damascus, Syria. The styles utilize heavily patterned circles and semicircles, as well as square structures with rounded roofs, at this point the use of brick had become widespread and nearly all Islamic architecture utilized this as a building material, rather than the preceding stone bases.

However, new modernist and contemporary styles have seen amazingly unique structures built with a variety of curves and interesting surfaces; these include the Auditorio de Tenerife which was built to be used as an auditorium for the country’s cultural programs and events, the Guggenheim Museum Bilbao which is world renowned as one of the world’s leading modern and contemporary art museums, the Barcelona Pavilion which was today is used for exhibiting various lines of work and the Ciudad de las Artes y las Ciencias (The City of Arts and Sciences) which features a variety of buildings designed to help exhibit the country’s contemporary art and fashion as well as new state-of-the-art technology.

Traditional male clothing sees use of the Barretina (a type of hat or cap), the Sombrero (a hat coming in three varieties: Catite, Calanes and Cordobes, varying greatly based on the region), the Traje de Luces (a sequined suit worn typically by bullfighters), the Montera (a type of hat worn by bullfighters) and the Zamarra (a sheepskin coat typically worn by shepherds but recommended for travellers).

Female clothing frequently includes the Manila Shawl (a light semi-transparent scarf worn around the neck and often seen during flamenco dances), the Mantilla (a black lace or silk veil worn on the head and shoulders as a symbol of religious piety), the Peineta (a large comb frequently worn with the Mantilla) and the Traje de Flamenca (a long flowing dress worn frequently by flamenco dancers).

Unisex clothing also includes the Cachirulo (a type of head-scarf or bandana), the Cantabrian Albarcas (wooden clogs with extended tips to elevate the wearer) and the Gilet (a sleeveless jacket similar to a body warmer). Additionally, some sects of the Nazareno and Phariseo brotherhoods may wear the Capirote (a type of white pointed hat, worn with a white head covering and white full-body robe) for particular rituals.

Throughout the region of space, each and every province has its own musical genre and culture associated with tradition, however, despite being different in name and in style, each typically incorporates a dance style with the musical genre, making them ideal for festival and party celebrations.
Southwest Spain sees the country’s most famous style, Flamenco (a genre incorporating singing, guitar playing, dancing and handclaps), which was developed from the Seguidilla, a type of Castilian medieval dance. However, despite being Andalusian in origin, the Flamenco is a popular dance with couples all over Spain. The region also sees the styles of Copla (a genre featuring verses of four with multiple double-entendres for comic effect) and Jota (a style with an emphasis on percussion and dances with synchronized jumps).

Southeast Spain bases its music in a similar style to Flamenco called Cante Jondo which features a unique vocal style and support from a Rondalla (a band consisting entirely of plucked-string instrument players). Additionally, Christian songs are sung A Cappella and sometimes accompanied by church bells, these also include Cuadrillas which are sung frequently during festive times such as Christmas, Easter and other typically Christian-religious events.
Northwest Spain features a plethora of medieval-based genres and styles which frequently use the Gaita (a type of bagpipe), the Tamboril (a type of snare drum), the Requinta (a type of fife), the Rebac (a type of fiddle), as well as many types of harps and tambourines. Additionally, sung lyrics are prominent in this type of music. This region sees many festivals utilizing these music types, typically celebrating pre-Roman Celtic culture and using a 6/8 tambourine rhythm in circular dances.

Northeast Spain tends to be more oriented towards the instruments derived from the accordion and the tambourine and frequently include the Txistu (a type of pipe), the Alboka (a double clarinet) and the Txalaparta (a large Xylophone played by two people). These are used to play many varieties of dances such as the Zortziko (a genre with a 5/8 time signature incorporated into folk and classical music types alike), the Jota and the Fandango (a genre incorporating a lively couples dance in triple metre).

Literature-wise, Spain is known for its mix of Christian, Jewish and Muslim influences, among others, and features poetry, literature and theatrical plays based around the religious tales of the various groups. During the Medieval era, common productions included the Mester de Juglaria (Ministry of Jongleury), the Mester de Clerecia (Ministry of Clergy) and included authors such as poet Jorge Manrique who wrote lyrics based on the courtly-love tradition and two satires.

During the Reconquista, one of the most prominent pieces was the epic Cantar de Mio Cid (The Song of my Cid), which, to this day, has a completely anonymous author. During the Renaissance, the literature rapidly became more religiously-based with authors such as the translator and academic Luis de Leon, the saint San Juan de la Cruz (also known as John of the Cross) and the saint Teresa Sanchez de Cepeda y Ahumada (also known as Teresa of Jesus) rising to prominence during the Spanish Golden Age.

During one of the most important times for development during Spanish culture, the Baroque saw writers such as playwright Miguel de Cervantes, politician Francisco de Quevedo and dramatist Tirso de Molina write works such as Don Quixote, El Buscon and Comedias Escogidas, respectively. The Enlightened and Romantic eras following this saw contributors such as poet Leandro Fernandez de Moratin and dramatist Jose Zorrilla, respectively, produce works such as El Viejo y la Nina (The Old Man and the Young Girl) and Don Juan Tenorio, also respectively.


Beginning with the traditional end of Christmas on January 6th, it’s believed that this date marks the time that the Three Kings of the Nativity Story brought Jesus gifts. February sees the Carnival of Santa Cruz de Tenerife take place, and, similar to the Carnival in Rio de Janeiro, Brazil, the celebration sees a variety of precessions and thousands of people in brightly coloured fancy dress. During March, Falles, or Fallas, is held in Valencia and a wide variety of street precessions and parties take place.

Taking place in April, the Spanish equivalent of Easter, Semana Santa, features long processions re-enacting the Crucifixion of Christ to celebrate Holy Week. Cruz de Mayo, also known as Fiesta de las Cruces, is celebrated in early May as the day Jesus Christ is said to have died on the cross. Picking up the mood significantly in late June, the Haro Wine Festival sees participants consume large amounts of alcohol and end the event with the Batalla de Vino (Battle of Wine) where a free-for-all with wine buckets and soaked shirts begins.

In July, Encierro, or Running of the Bulls, sees a herd of bulls released from their pens to speed through the city streets to a second series of pens, youngsters and adults alike test their mettle by running in front of the bulls as they run. In August, Tomatoes are thrown wildly during the Tomatina Tomato Fight. Then in September, one of the biggest film festivals in Europe, the San Sebastian Film Festival, takes place.

In October, the Fiestas del Pilar is organized in the form of a variety of events in honour of the patron saint of Spain, the Virgin Mary. November sees a range of film festivals and media events all over Spain, especially in Barcelona. Then finally, in December, Christmas is celebrated in a similar way to the rest of the developed western world. 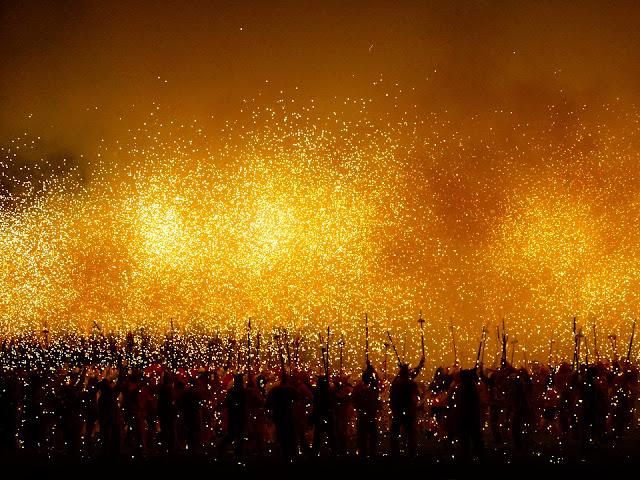