Around 95% of all individuals in Zambia have reported having Christian beliefs with around 66% of these being Protestant, 20% being Catholic and around 9% being of other Christian belief, a further 5% are of other beliefs or are non-religious.

Other beliefs in the country include the Christian denominations of Pentecostalism, Presbyterianism, the New Apostolic Church, Jehovah’s Witnesses, Seventh-day Adventism, Lutheranism, Branhamism, The Church of Jesus Christ of Latter-day Saints and many other Evangelical denominations. Additionally, significant portions of the population are Muslims, mainly of Sunni, Shia and Ahmadiyya sects, and there’s a small Jewish community, mainly Ashkenazis. Tribal and indigenous beliefs also exist throughout the country in small pocket groups as well. Finally, the Baha’I faith makes up a significant portion of the Zambian population as well with around 160,000 practitioners active in the country.

Zambian Architecture sees three main varieties, which include Tribal, Colonial and Modernist building styles. Tribal styles vary from region to region and may see various stylizations of villages, mainly those resembling the designs of the major pre-colonial era kingdoms. Colonial buildings tend to use quick-build wooden structures and may see small amounts of brickwork for solidity or foundational purposes, having a strong European or Arabic style (derived from that of the Arab traders). Modernist styles see contemporary cities with large-scale high-rise buildings in the country’s most populous areas such as Lusaka. 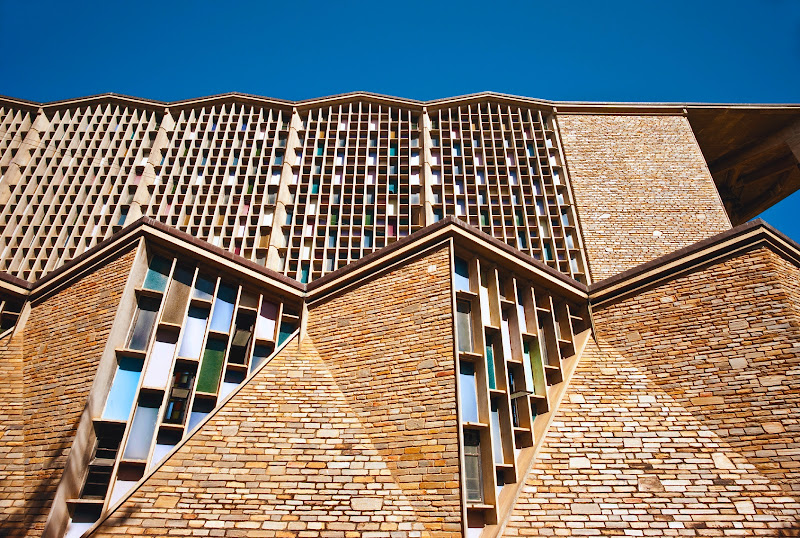 Although today most Zambian nationals wear western-style clothing, especially so in urban areas, traditionally the style of clothing varied dramatically among Zambia’s tribes, numbering over seventy. Many tribes used animal skins, strips of cloth, beads, rattles and the like for their ceremonies, but more frequently worn is the Chitenge (a long gown made out of cotton) and the Musisi (a type of flared dress worn by both men and women). It’s also common for men to wear a waistcoat with the Musisi which often incorporates a printed design and a red cotton hat, but may be other colours as well.

Zambian literature is very recent and really only sees writers from the 20th Century onwards. These writers are most frequently politicians and activists and tend to cover the situations surrounding the politics in Zambia and neighbouring countries as well as the Apartheid. Notable authors include Kenneth Kaunda, Andreya Sylvester Masiye, Charles Mwewa, Princess Zindaba Nyirenda, Chibamba Kanyama, Dominic Mulaisho, Keith Nalumango and Binwill Sinyangwe (all 20th Century).

Zambia sees eleven public holidays throughout the year, starting with January 1st: New Years’ Day. On March 12th, Youth day sets in for the second public holiday of the year, then in late March to early April, Good Friday and Easter Monday are celebrated. May 1st sees Labour Day and then on May 25th, African Freedom Day is celebrated.