Egypt’s state religion is Islam, of which 90% of the population follows, and of these, Sunni is the main branch but Mu’tazila, Shia Twelvers and Ismailism are prominent as well. Sufi orders are also not uncommon. Christianity is also very frequent throughout the country with about 9% being Coptic Christians, including Coptic Catholics, Coptic Evangelical and Coptic Protestant denominations, and 1% of Christians are non-Coptic. Judaism is also common in the country.

It’s important to note that Baha’ism also exists in the country but often face persecution alongside other smaller faiths, these religions are not recognized by the government, as is the case with atheism and only recently saw changes to allow members of unrecognized faiths to obtain ID from the government whilst leaving the religion field blank.

Due to having one of the oldest civilizations in the world, Egypt’s architecture varies greatly and structures as old as five thousand years old to ones as young and recent as constructed in the 21st Century are visible. There are over 60 museums though out the country, the biggest of the three which are the 6th of October Panorama, the Egyptian National Military Museum and the Egyptian Museum, the last of which contains over 120,000 items from Egypt’s history and cultural identity. 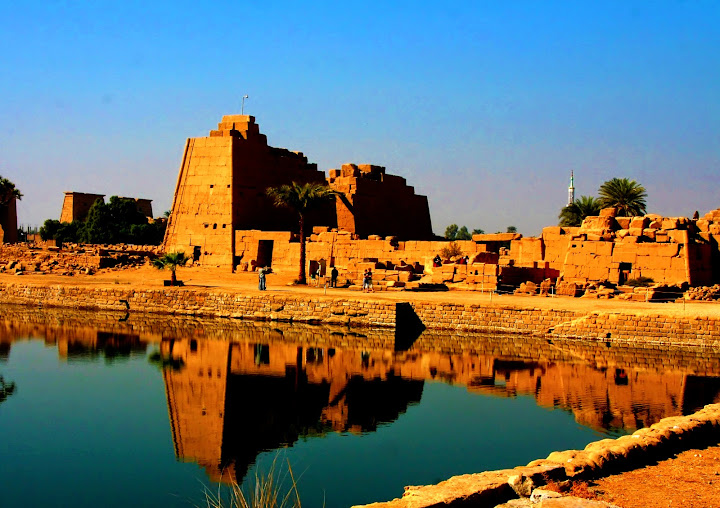 Today Egypt is an Islamic country and as such it’s common to see clothing inspired by the other Arabic nations nearby worn most frequently, this includes the Kefiyeh (a cloth wrapped around the head) and the Thawb (a type of long robe) worn by men, and the Hijab (a cloth wrapped around the head and upper body) and the Abaya (a long body covering) worn by women. Western clothing is also very common today.

Historically however, the clothing was very different. In Ancient Egypt, Men would wear the Shendyt (a kilt or skirt like garment) whilst Women would wear simple long dresses called the Kalasiris. Cosmetics, Wigs and Jewellery were common, especially among nobility, and Sandals were worn depending on the situation. Additionally, the nobility would wear a Khat (a head covering worn over the crown and hung down the back of the head).

The Ancient Egyptian culture is believed to be the first civilization to have developed literature which was most frequently either written onto Papyrus and rolled into scrolls or were long in-depth stories inscribed on monuments and tombs. As Islam moved into the country, Egypt saw a dynamic shift in its style of writing through the 7th to the 18th Century, then as European presence became more known, the country underwent another dynamic shift of culture. Today, Egypt’s novelists and authors have expanded greatly and include legendary writers such as Muhammad Husayn Haykal (Zaynab), Naguib Mahfouz (The Cairo Trilogy), Nawal El Saadawi (Memoirs in a Women’s Prison).

Dance is one of Egypt’s fortes and sees Belly Dance as its own original creation. The dance is split into two genres of Belly Dance; Raqs Sharqi, which takes on more of an oriental appearance, and Raqs Baladi, which is more of an indigenous native variety. Additionally, Shaabi is a popular dance performed on the street which is similar to the latter Belly Dance style. Famous dancers in Egypt include the likes of Samia Gamal.

On top of standard Islamic festivals practiced in the Gulf region, Egypt includes festivals, typically based on various Saints of the Coptic and Sufi denominations, called Mulid, as well as the ancient spring festival of Sham en Nisim held in April or May, following Easter Sunday. Ramadan is also especially celebrated in Egypt but sees the unique practice of sounds and lights incorporated into the celebrations.