The last 10% of the population is mainly made up of indigenous religions and some small groups of immigrant religious sects.

Architecture in Brunei is built primarily on stilts out of wood, due to most of the country lying on water, and the houses are kept open to allow the breeze to cool down the house due to the country’s all-year-round hot climate. Today most of the region uses western style apartment complexes and buildings but this traditional style is still seen in many places, especially in Kampong Ayer.

Additionally, Chinese and Indian influences have had a definite effect in the style of the architecture, but more prominent are the Islamic influences prominently defined upon entry to the region near the start of the 15th century AD. Some of the most prominent Islamic structures include the Royal Palace of the Sultan of Brunei and the Sultan Omar Ali Saifuddien Mosque, both of which are considered to be architectural masterpieces. 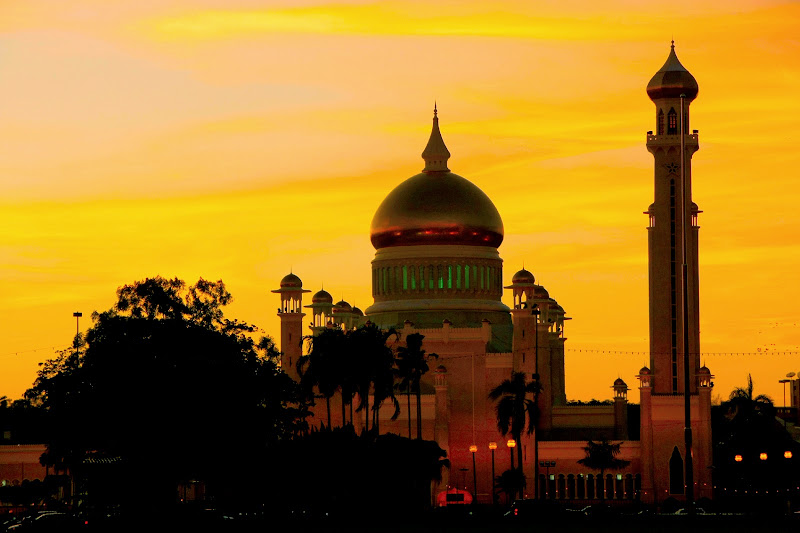 Although nowadays western clothing such as jeans, shorts, skirts and the like are more common than not, Muslims must follow a strict dress code, especially in public places and government offices. Muslim women nearly always wear the Hijab (a type of head scarf) and the Abaya (a long black body covering), but these are typically of a lighter and brighter variety of colours when compared to their Middle Eastern counterparts. Men on the other hand, are more likely to wear a Keffiyeh ( a head covering) and a Thawb (long white body coverings).

Due to the Islamic influence in the region, public dance performances, poetry readings, musical performances and literary readings are restricted and have subsequently restricted the development of the art forms connected to these practices. However, fishers are known to sing Adai-Adai, a type of group work song, while they fished, and trios of men and women perform the Benari, a type of folk dance, during many festivals.

The Kedayan community often performs the Aduk-Aduk during holidays, most specifically and frequently during the harvest season. The dance is performed to the rhythm of percussion instruments and the gear includes black clothing, a red belt and traditional warriors’ attire, danced in to the beat of the Silat, a Malay Martial Art.

The Malay peoples also perform the Zapin dance, performed all across Malaysia and in Indonesia, this features six men and women that dance to the Guling Tangan (a type of gong), the Rebana (a type of drum) and sometimes singing. This is most frequently seen at wedding celebrations.

Like most other nations, Brunei begins the year by declaring New Year’s Day as a public holiday on the 1st of January. On the 23rd of February, the country takes another holiday in celebration of their independence from the United Kingdom in 1984, the 1st day of May sees Labour day celebrated and on the 31st, Armed Forces Day, the founding of the Royal Brunei Armed Forces, is celebrated as well. The opening and closing days of the Chinese New Year are also celebrated early on in the year.

In July, the start and the end of Ramadhan is celebrated as a public holiday around the beginning and the end of the month, as well as a day in the middle, and right in the middle on the 15th, the Sultan’s Birthday is also declared a public holiday. Around the later months in the year, Dhu Al-Hijjah, the celebration of the story of Ibrahim and Ismael, and the opening of the Islamic Calendar, are celebrated.

Christmas Eve and Christmas Day are both celebrated on the 24th and the 25th respectively, as is the 31st of December as New Year’s Eve, all as public holidays.