In 1991, the new Colombian Constitution guaranteed the freedom of all faiths through Acts 13 and 19, but due to history the country is mainly Catholic with around 82% of all Colombian inhabitants following the faith. A further 13% or so are Protestant Christians, making around 95% of the population Christian in nature.

Architecture in Colombia is more often than not derived from European Colonial buildings, especially Spanish Andalusian and are very frequently gothic in nature as is visible in Las Lajas Cathedral, Rafael Uribe Uribe Palace of Culture and in many areas of Bogota and Medellin. However, recent years have also seen many Neoclassical buildings, those of the Mudejar variety and even some Art Deco structures such as the Romelio Martinez Stadium and the Garcia Building in Barranquilla. 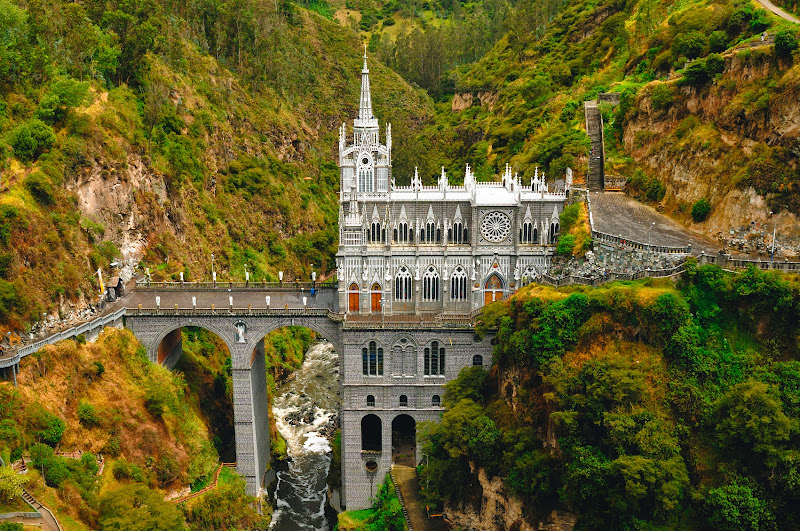 Today, most Colombians wear typical western-style clothing with those in the city centres veering towards dark-coloured suits and those in the suburbs preferring loose shirt, skirts and trousers. However, traditionally the clothing worn varied greatly and traditional outfits can still be seen during national festivals such as the Carnaval de Barranquilla.

Women often wear La Pollera Colora (a brightly coloured skirt with ruffles and lace around the neck and knee lines) and Men will wear something similar with more of an emphasis on fitted trousers and shirts (with the aforementioned ruffles and lace at the openings). Common Colombian clothing pieces worn by both genders include the Sombrero (a wide-brimmed hat) and the Ruana (a poncho-like cape).

Throughout the year, Colombia has over a hundred festivals which differ greatly from region to region and town to town, however, across the country a fair few days are celebrated across the board.

In January, Ano Nuevo (New Years’ Day) and Dia de los Reyes Magos (the Epiphany) are celebrated on the 1st and the 6th respectively. Then March sees Dia de San Jose (Saint Joseph’s Day) on the 19th and one or both of Jueves Santo (Maundy Thursday) and Viernes Santo (Good Friday) in late March or Early April.
May 1st sees Primero de Mayo (Labour Day) celebrated, and then the Ascension del Senor (Ascension of Jesus) celebrated 39 days after Easter Sunday, which lands some time usually in May. June sees Corpus Christi (Body of Christ) and the Sagrado Corazon (Sacred Heart) celebrated 60 and 68 days after Easter Sunday, respectively, as well as the days of San Pedro y San Pablo (Saint Peter and Saint Paul) celebrated simultaneously on the 29th.

On July 20th, the Declaration of Independence is celebrated with another public holiday, followed by the Battle of Boyaca on August 7th and La Asuncion (Assumption of Mary) on August 15th.

The last quarter of the year sees the Dia de la Raza (Colombus Day) celebrated on the 12th of October, followed by All Saints’ Day on November 1st, the Independence of Cartagena on the 11th of November and La Inmaculada Concepcion (Immaculate Conception) on the 8th of December. Finally, the year is topped off with Christmas Day, or as it’s called in Colombia, Navidad, on the 25th of December.