Although mainly influenced by Spanish origins, Argentina’s cuisine combines a blend of Mediterranean, European and Indigenous varieties and sees a wide range of ingredients from all across the country. Argentina’s national dish is Asado (barbequed meat) which is often accompanied with a social gathering or event of sorts. The country’s cuisine can be broken down into four main areas; Central, North West, North East and South.

Central Argentinian Cuisine has been largely inspired by dishes from the Middle-East, Switzerland and Italy and Germany and subsequently see a range of sauces, sausage dishes, chicken and meat courses, stews and fritters among others. Common dishes include Spaghetti, Gnocchi, Lasagne, Achuras (Cows innards), Morcilla (Blood Sausage), Lomo (Tenderloin) and Choripan (Pork or Lamb sausages in a sandwich).


North Western Argentinian Cuisine sees more Indigenous influences and as a result the dishes of the region typically include more vegetable, cereals and maize (corn). Dishes may include Humita (corn, onions and spices kneaded into dough and boiled in corn husks), Tamales (corn-based dough boiled in corn husks), Empanadas (Meat or Vegetable pasties) and Locro (thick stew made from corn, potatoes, beans and cucurbita soup).

North Eastern Argentinian Cuisine tends to veer closer to native tastes as well with many dishes coming from the Guarani tribe and focusing more on a seafood diet. Meals may include Dorado, Surubi, Silverside, Boga and Pacu (all types of fish), as well as Cassava, Papaya, fruit jams and Yerba Mate which may find their way into dishes such as Chipa (Cassava and Cheese Bread) and Terere (cold water mixed with Yerba Mate, ice and various other herbs such as mint, lemongrass as well as lime and orange juice).

Southern Argentinian Cuisine also include lots of seafood but puts an increased amount of focus on berries, livestock (mainly sheep) and wild meat (mainly boar, stag and pheasant). Dishes often include seafood such as salmon, squid, sea snails, spider crabs and trout as well as berries such as cherries, strawberries, elderberries, bilberries and rosa mosqueta as well as chocolate. Cuisine may include Argentine Chorizos (pork sausages), Curanto (beef, pork, lamb, chicken, sweet potatoes, squashes, cream, pease, cheese, apples and/or potatoes placed on a hot stone that has been dug around a metre and a half into the ground.) 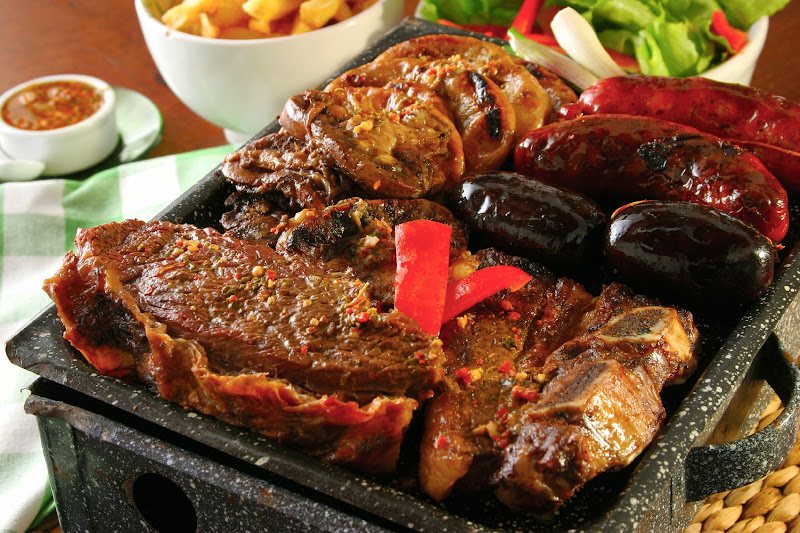