In Saudi Arabia, 25 of the 30 million inhabitants consider themselves Muslim, around 83% of the total population. However, the 17% are immigrant workers and of those left, 100% are thought to be Muslim. Of these, around 85-90% of the Muslim population are Sunni while 10-15% are Shia. Most dominantly, Wahhabism (also known as Salafism) is the most prominent Sunni sect.

In the country, no other religion is allowed to be practiced. Indeed, acts of religion outside of Islam are completely prohibited. That said, over a million migrant workers are thought to be Christian, around 3% of the population. There are a few Hindus and Buddhists across the region also. Additionally, converting from Islam to any other religion, also known as apostasy, carries the death penalty, although there have been no reported executions for this in recent years, and becoming a Muslim from another faith is also illegal. Atheism is also officially considered a form of terrorism in Saudi Arabia in article one of Royal Degree 44.

Islamic architecture is primarily based around symmetrical, circular and floral designs and sees many spires on mosques, as well as domed roofs. Saudi Arabic is considered the cradle of Islamic and Arabic culture and it would make sense that the holiest sites are based in the country including the Masjid al-Haram Mosque in Mecca and the Al-Masjid al-Nabawi Mosque in Medina, the mosques respectively house the Kaaba and Muhammad’s tomb and keep very strongly to Islamic architectural styles. 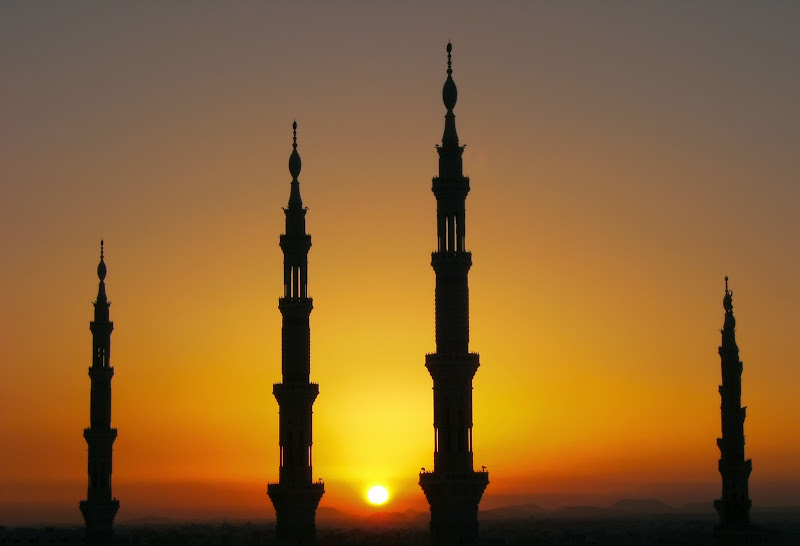 Sadly due to vandalism by Saudi Wahhabism followers, a wide majority of sites have been destroyed over the years and today over 300 historic sites linked to Muslim inheritance, especially those centred around Muhammad and his family & companions, have been lost. In Mecca alone there are less than 20 structures that date back to the time of Muhammad.

Saudi dress follows Islamic principles of modesty and sees full-body covering as standard in the country.

For men, this includes the Thawb (a normally white garment which covers the entire body from neck to ankles, complete with long sleeves), the Gutrah (a headdress made of a square of cloth), the Agal (a ring-shaped head binding used to keep the Gutrah on the head) and the Bisht (a thicker cloak worn over the top of the Thawb for either special occasions or in cold weather).

Women typically wear the Abaya (a black long-sleeved cloak covering the entire body from neck to ankles), the Hijab (a head covering) and often, the Niqab (a facial covering allowing only the eyes to be seen).

Saudi music is very similar to the surrounding Arab states, instruments include the Rababah (a three-string fiddle), the Tar (a Tambourine) and the Tabl (a Drum). Music is associated heavily with poetry and songs are sung as such. Dances performed with music include the ‘Ardah which features a line of men, often armed with swords and/or rifles, whom dance to the beat of percussion instruments.


Saudi literature has developed slowly due to heavy censorship, and outside of Bedouin poetry, known as Nabati, there are only a few well-reputed authors. These authors include Ghazi Algosaibi, Turki al-Hamad, Abdelrahman Munif and Rajaa al-Sanea.

Starting at a different time of year each year (Late July for 2014, Mid July for 2015 and Early July for 2016), The Feast of the End of Ramadan, known as Eid ul-Fitr or more simply, Eid, is celebrated and sees families and local communities joined in huge feasts following the month-long daylight fast of Ramadan. The celebrations last for ten full days.

Unlike other countries around the world, Saudi Arabia is unique in the fact that it follows the Islamic calendar rather than the Gregorian calendar, and as such it does not celebrate New Years’ Day on January 1st at all.