Turkey, despite having no official state religion and being considered a secular state, is predominantly Islamic, and over 96% of the country are Muslim, a further 3% are secular Muslims. The most popular sect of Islam in the country is the Hanafite school of Sunni Islam and the religion has over 80 thousand mosques across the Anatolian region.

Turkey’s architecture frequently depicts old-world references and pays tribute to the now-fallen Ottoman Empire but is also influenced directly by other nearby European nations as well as Islamic Arabic cultural building styles as well. Mosques are widespread and come in variations such as the tiered, single-domed and subline-angled variants. Today, the biggest and most famous of these mosques include the Sultanahmet, Fatih, Mahmut Pasa and Bayezid II Mosques in Istanbul as well as Topkapi Palace.

Many buildings in the 15th to the 18th Centuries developed courtyards to existing structures and between the 18th and 19th Centuries, widespread westernization caused a more modern appearance to surface in many structures across the country; these developments are particularly visible in Dolmabahce Palace. Today, the region (and especially the major cities such as Istanbul), use new-style buildings like those across western cities like New York and Los Angeles in the US, and London in the UK. 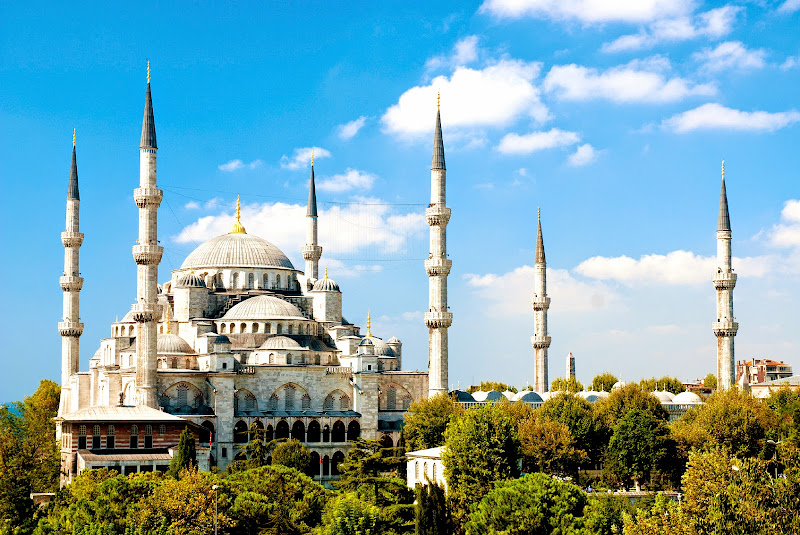 Although today most of the country conforms to either western-style clothing or Arabic robes, historically the dresswear was very unique to the Anatolian region and not seen elsewhere across the world, this has given rise to new styles and culture inherited from Turkish origins.

Men would often wear the Salvar (a type of trousers with a baggy middle), the Entari (a loose coat), the Fez (a type of hat) and the Yemeni (a type of sandal or shoe). Women’s clothing was often very similar but typically used a long dress worn either over the top of, or instead of, Salvar. In Aristocracy, it was common for the Caftan (a long type of coat or overdress) to be worn, often lined with expensive fur. In contrast, the middle class typically wore the Hirka (another type of long coat) and the lower class wore the Cepken (a type of collarless shirt) or the Yelek (a vest). The richest of the Aristocrats and the monarchy were often seen wearing rare stones and jewels adorned on their garments.

Turkish literature is comprised of a mixture of oral traditions and stories as well as written texts and prose, usually of Ottoman Imperial origin. The history of Turkey’s literature goes back well over 1,300 years but has only become united recently following the forming of the Republic of Turkey in 1923.

Much of the Anatolian region uses oral traditions to remember and recall stories and folk tales, often inspired by Islamic origins but sometimes varying with European influences. Some of the best examples of folktales are those surrounding Keloglan, a young man who attempts to repeatedly find a wife whilst keeping his mother’s house intact and dealing with the problems of neighbours, as well as Nasreddin, tales of a trickster who plays practical jokes on his neighbours.

Mid-June sees the June Solstice to celebrate the changing of the seasons, then around a week later Ramadan begins and lasting for four days the public is given several holidays. Victory Day is celebrated as the founding of the Republic in late August as another public holiday.